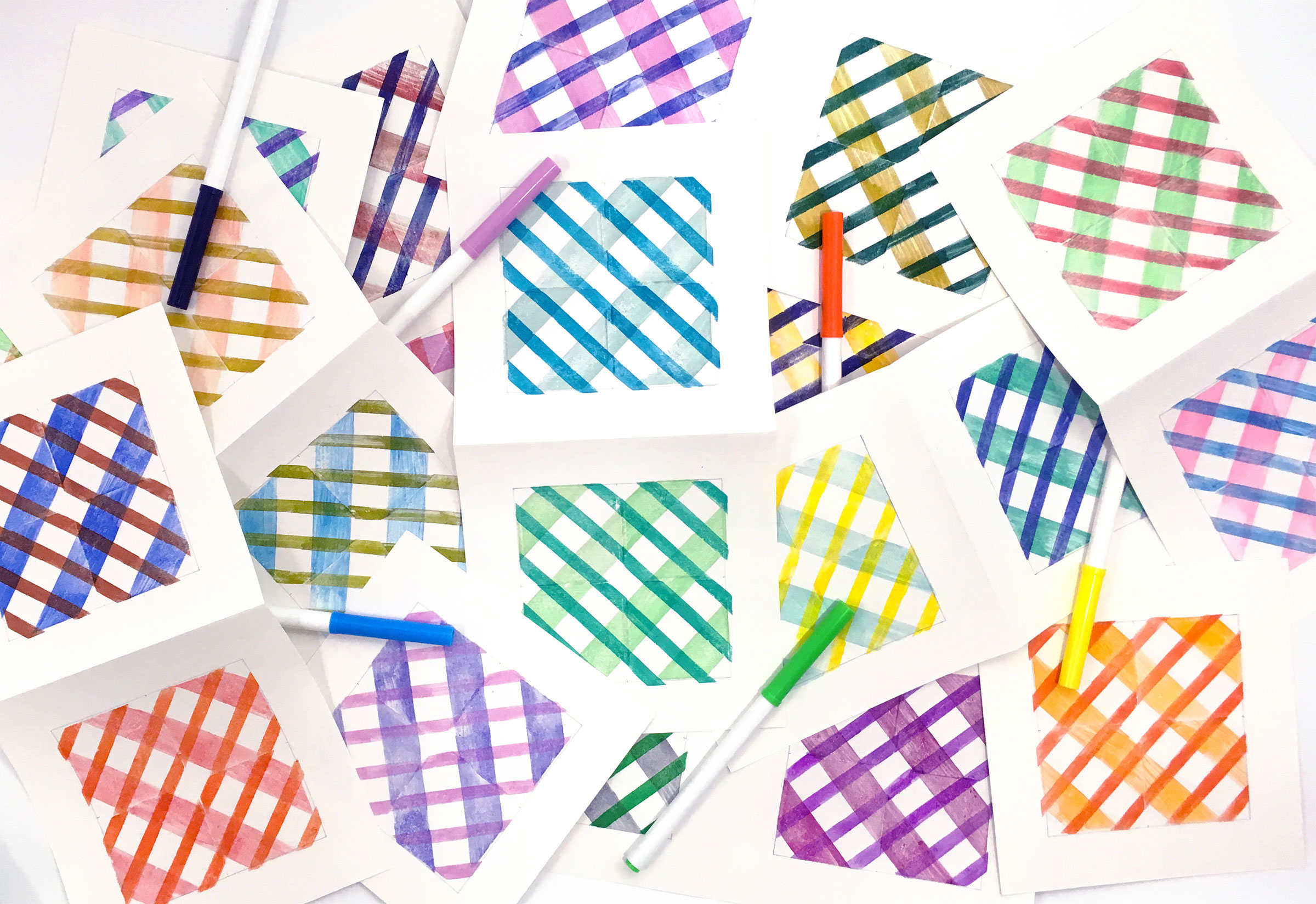 For an independent study course, I challenged myself each week to find materials for $5 or less and use them to create some kind of graphic output. One week I invested my five into a 2" x 2" linoleum carving block. Inspired by Le Tampographe and the way they create repeating and overlapping patterns, I designed a pattern that I could 'tile' infinitely by lining up stamp after stamp in any direction. 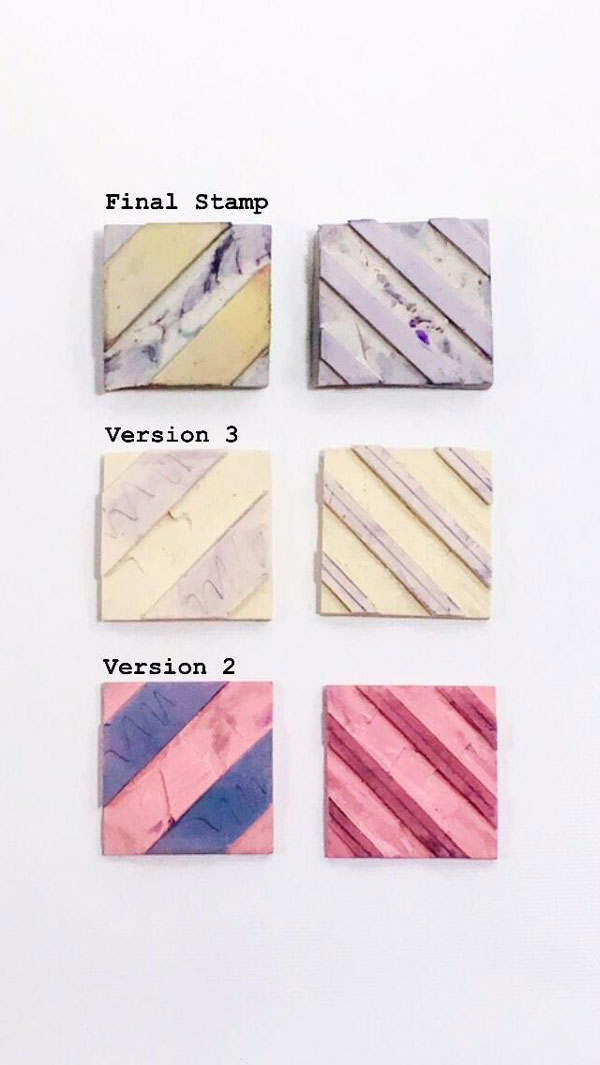 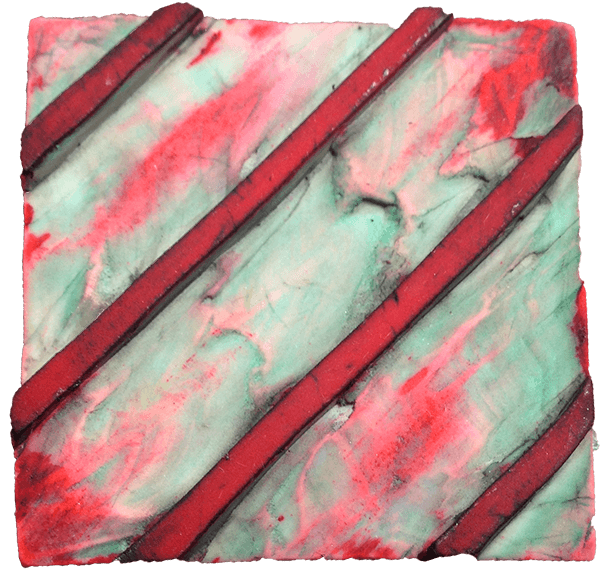 As a big fan of stripes—such a simple yet variable motif—I thought it the perfect pattern to use in the stamp design. One stamp, a set of thick bold lines contrasted a second stamp of thinner lines with double the space between them. In my first iteration, these designs were set back to back on the same ½" thick linoleum block due to the challenge restraints.

With this prototype, I experimented in application of the stamps, the various 'inks' to print with, as well as the substrates to print on. My ink choices were a $1 thrifted ink pad, purchased with the change from buying the linoleum block, a 100 piece set of markers I already owned, and oil-based printmaking ink borrowed from a friend. 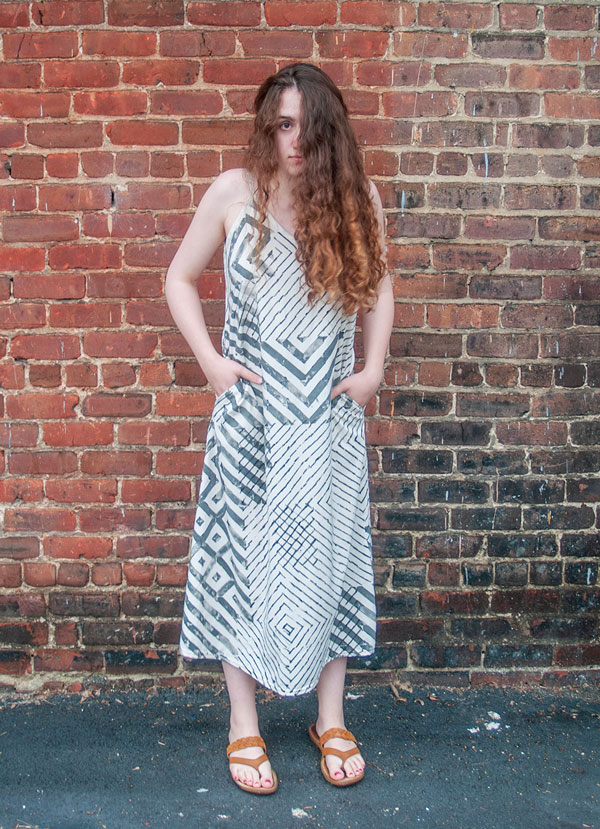 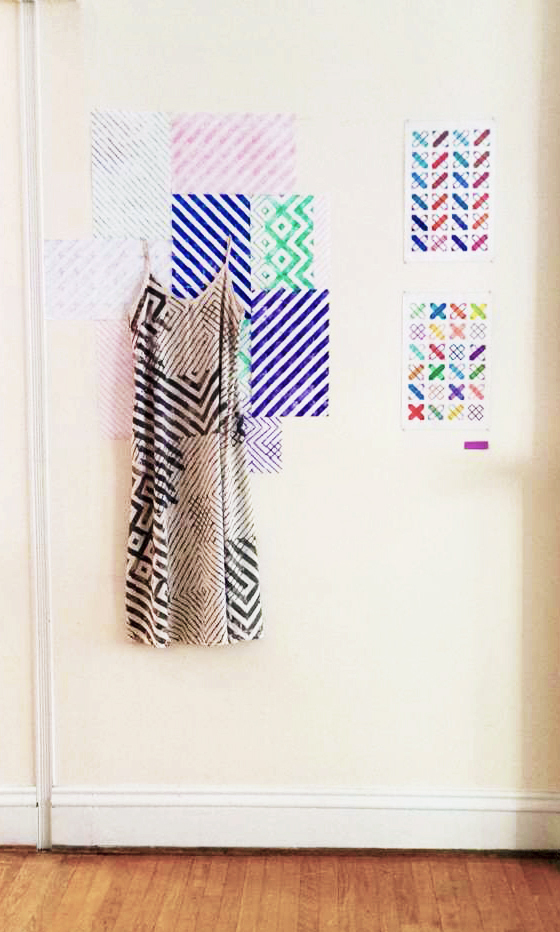 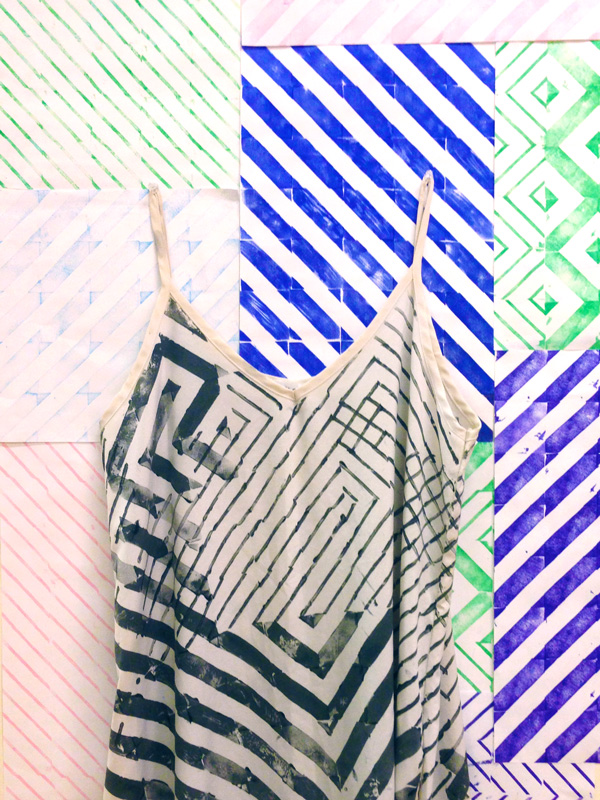 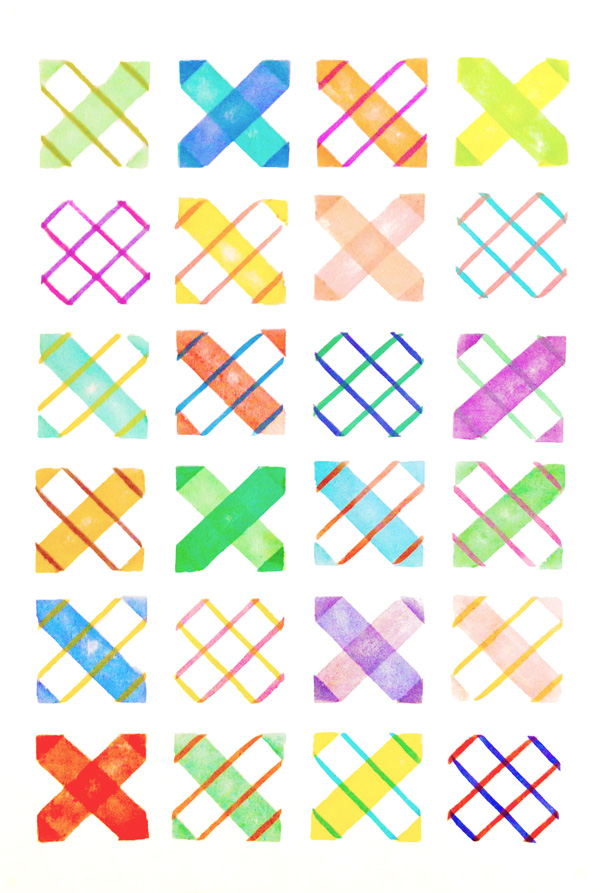 My first practice with the stamps was to learn mastery over alignment and gain experience using the inks. Once I was comfortable using the stamps, I experimented with mixing the thick and thin stripes, overlapping patterns, and alternating the stamp orientation. I found the markers to be semi-transparent when printed and continued experimenting with color choices to create new colors when overlapping stamps.

I was also interested in how the continuing stripe pattern would look on a larger and more 3D surface than paper. Digging an old, solid color dress out of my closet, I took the printing ink to it and stamped patches of the stripe patterns I'd experimented with all over the fabric. Not only did the stripe alignment hold up over such a large surface area, the fluidity of the pattern over fabric created even more interesting intersections of stripes.


All these experiments were displayed in a semester's end exhibit with Kappa Pi Art Fraternity in 2016.

Years after this project concluded, I took up the exacto knife again and went about perfecting my stripe stamp design. I tested the exact size of the stripes and the spacing between them for each design, reconfigured the connection between the thicker stripes, and tried out new linoleum blocks before settling on a final stamp design.

My next project with the stamps was to create a color book of stripes. With my 100 set of markers used as ink choices, I printed two colors in a 2x2 stamp grid, one color of thick lines diagonally overlapping another color of thin lines. Each print combined color choices to create a dual color stripe swatch, no two color combos the same. I aim to reach around 400 combinations and bind the prints into a reference book I'll use for color palette inspiration.

These stamps have been invaluable tools for stripe-making and have often come in handy. I've used them for adding texture to white space in both print and digital matter—even in the background of this site—as well as featuring stripes as the main decoration, like printing a custom wrapping paper. My favorite application was using them to mark the edges of a special envelope in a red and blue Air Mail style border. Certainly these stamps will remain a well-loved tool in my arsenal. 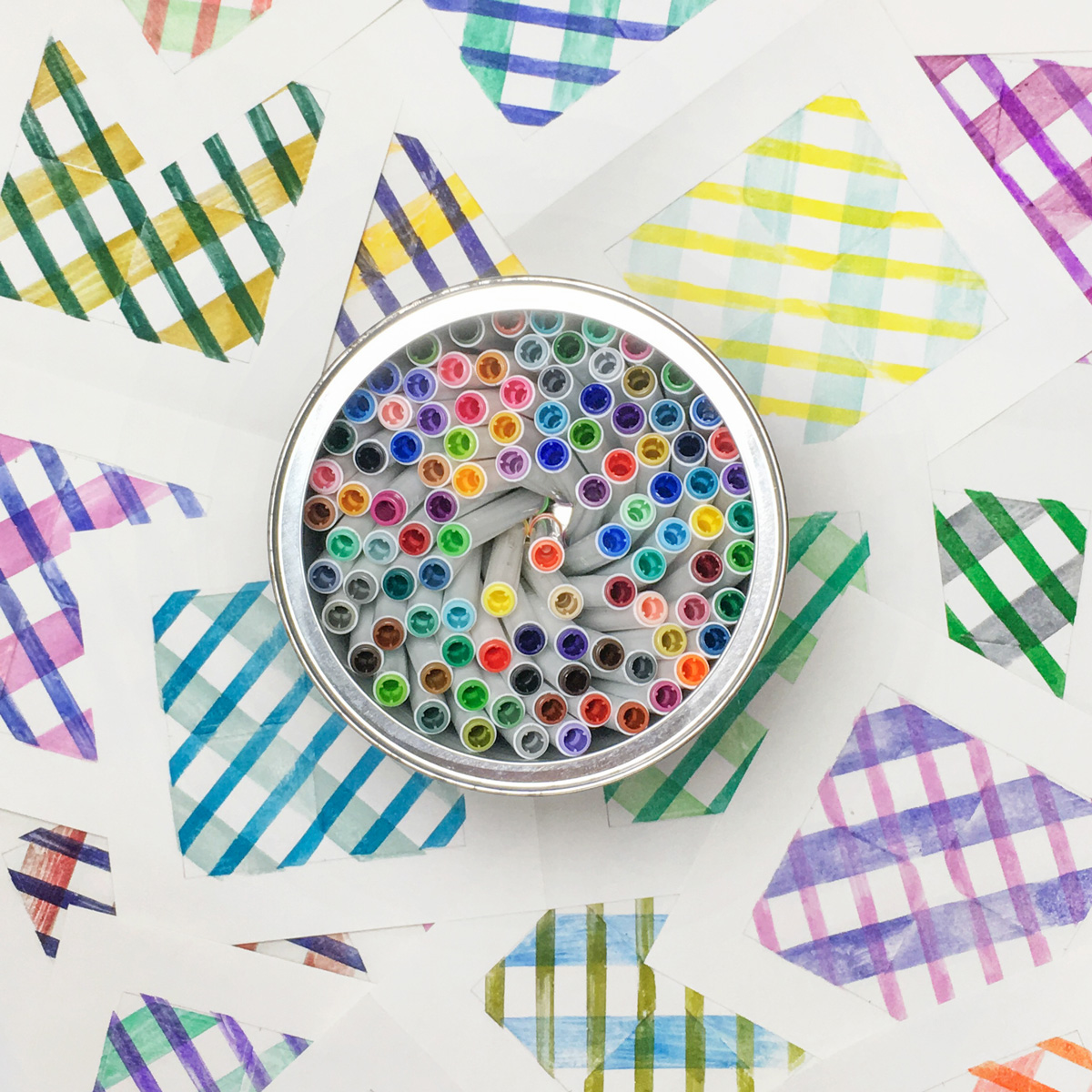 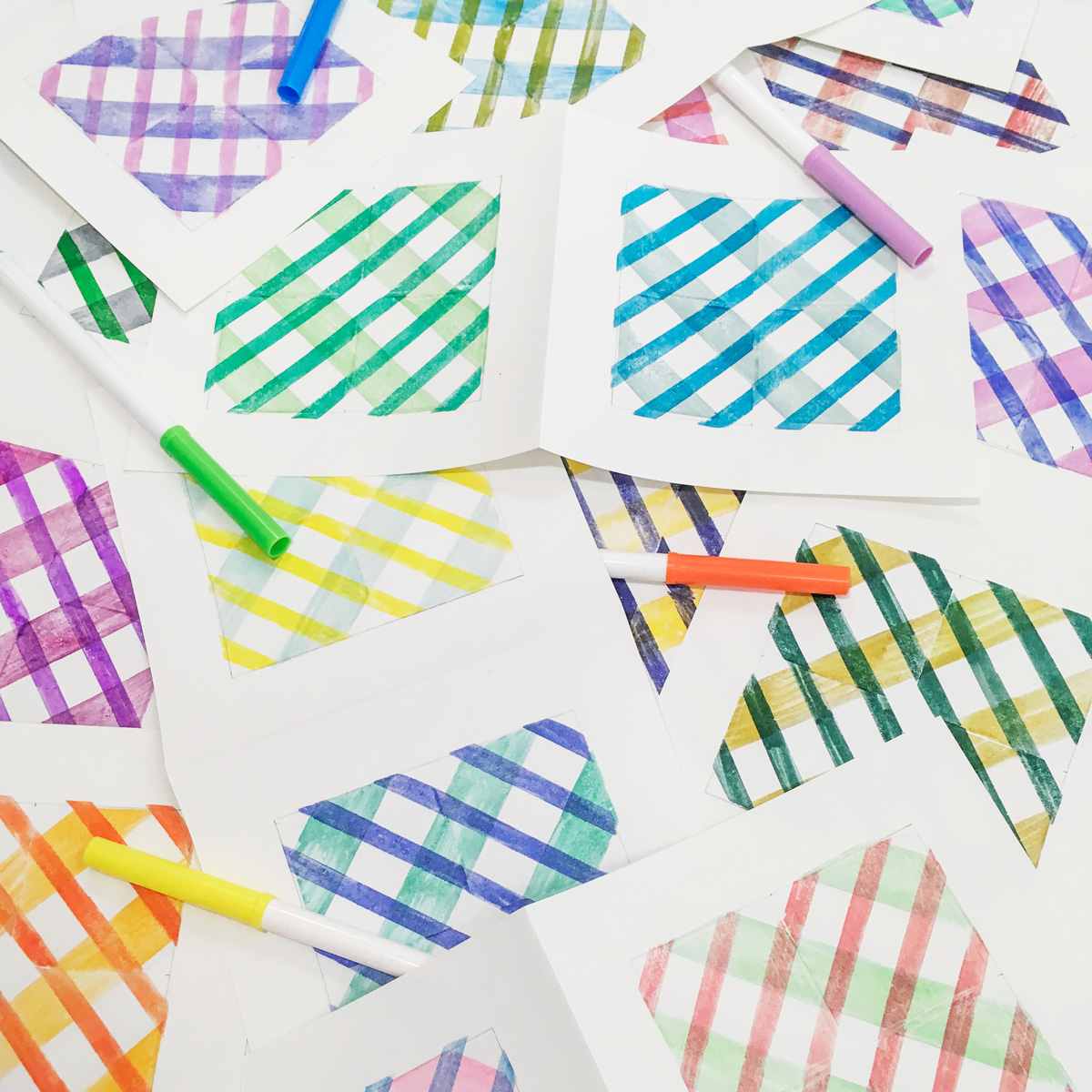